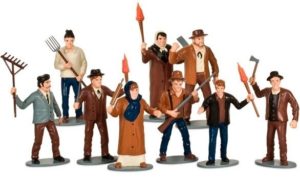 A hallmark of human civilization is the habit we have of dividing the world up into “Us and Them”. The group that we describe as “Us” always deserves trust, respect, and the benefit of the doubt. The group we describe as “Them” is usually out to get “Us”, and their actions are suspicious if not downright hostile. Since we are being attacked by “Them”, it gives “Us” the right to do almost anything in self defense or even retaliation.

To make things even more complicated, we have a tendency to apply this segregation over vast expanses of time and space, dividing the people of many generations and geographies into these two groups. When picking “Us”, we tend to select those that can further our feeling of persecution, those who have been mistreated or betrayed. And, when picking “Them”, we choose the persecutors and betrayers.

Unfortunately, most of “Them” think of themselves as “Us”, and believe that we are “Them”. Since they can’t really be trusted, this is obviously a trick.

As an example, consider myself. I am a white male with ancestors stretching back to the British Empire. Not nearly enough persecution going on there… So, I identify primarily as “Pagan”. My “Us” includes most currently practicing Pagans, people who were murdered as part of the witch trials, and anyone ever persecuted for their religious beliefs, Pagan or not. My “Us” does carefully exclude Pagans whose practices are too eccentric for me, and Pagans that believe they are the only true Pagans. I also carefully exclude the ancient Roman Pagans who had the bad habit of feeding early Christians to lions for entertainment. Interestingly, I have to exclude those early Christians, too. Though they were certainly being persecuted for their religious beliefs, their modern counterparts are currently “in charge” in my country, so they have to be excluded to avoid confusion.

This gives me a nice simple “Us” that love the earth, respect each other, have never persecuted another group, and are generally not too crazy. And, not surprisingly, we are being persecuted by “Them”. My personal division of the world gives me lots of wonderful opportunities for righteous indignation and, if I am exceedingly lucky, perhaps even martyrdom. Though, I do hope the martyrdom happens to someone else, another one of “Us”, so I can fully savor it and, perhaps, start a blog.

hypocrisy
By JohnsonDecember 12, 2012Blog, Unreliable Narrator1 Comment on Us and Them

One Reply to “Us and Them”